I just listened to self proclaimed New York City Lawyer Barry Ginsberg be interviewed on Susan Arbetter’s capitol pressroom. If you like listening to a pompous arrogant angry New York City lawyer argue with the host using mono syllable responses to softball questions then the final half hour is the show for you. If you want to hear the state of integrity in New York just listen to the first 15 minutes while Blair Horner is on.

I was amazed how combative Barry was to questions that did not require any kind of defensive response. This is one angry dude. I’m beginning to think he may have a problem with women questioning him. Not a good trait for an executive director whose chairperson is a woman.

What did he have to be angry about?

Susan didn’t ask him to explain the conflict that he has with his wife being a lobbyist and how the commission treated her filings.

Susan didn’t ask him to explain how commission member John Brickman has a conflict as a result of serving on the boards of not one but two companies that are regulated by the commission.

Susan didn’t ask him to explain how commission member Howard Levine has a conflict by serving as of counsel to a law firm that is a registered lobbyist and therefore regulated by the commission.

Susan didn’t ask him to explain the timing of his Yankee ticket investigation and how with the future of the commission on Governor Patterson’s desk he ramped up an investigation into the governor that had lain dormant for 3 months.

Susan didn’t ask him to explain why commission staff have framed cartoons on their desks making fun of ex Governor Patterson having to pay the commission a $62k fine It’s a pretty good example of the kind of impartial professional staff effort we’ve come to expect from the commission staff (by the way if that’s what you consider a trophy you need a large dose of confidence just to get to normal) My guess is Barry had his lunch money stolen as a kid on a regular basis, probably by a girl. 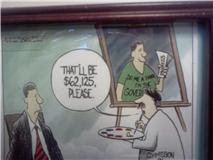 Susan didn’t ask him to explain why the Inspector General’s report noted his attempts to inhibit their investigation of Herb Teitelbaum. Barry made sure to note that he didn’t work for the commission when Herb leaked the information to the Spitzer minions which is technically true but he was involved with the ensuing cover-up up to his eyeballs.

Susan didn’t ask him to explain how the esteemed John Feerick ignored the Albany County District Attorneys complaint regarding Herb Teitelbaum a complaint that the Inspector General validated in its report. Barry even said he still thinks the commission did nothing wrong. And that alone is enough reason for the new chair to terminate Barry if she ever wants the public to have any faith in this commission. The new chair is very familiar with dirty cops and the mafia, now I’m not saying Barry is a dirty cop and the spitzer folks were the mafia but you get my point.

Susan didn’t ask him to explain why he lets disgraced former executive director Herb Teitelbaum continue to visit the private commission offices while everyone else must remain in the reception area. By the way Barry why don’t you ask your buddy Herb to go to lunch with you and the new chair give her a real good look at your mentor and how it still effects your management decisions.

Susan didn’t ask him to explain how they can fine lobbyists and clients under the gift ban when they refuse to provide opinions about the application of the law and after yesterday’s meeting it is painfully obvious the majority of these New York lawyers on the commission would have a hard time passing a class in the Lobby Law yet have no problem imposing their personal ethics beliefs on the lobbying community no matter what the law says (see “TROUBLED” on the blog).

But my favorite Barry BS comes at the 37:00 minute mark where he states that public confidence in integrity is low because the public isn’t involved enough. Really it’s the publics fault that the commission is so secretive they refuse to tell the public what they are doing, they exempt themselves from the FOI law and flaunt the open meetings law by going into executive session but never disclosing what they do while in executive session (other than gorge themselves on a catered lunch).

Can you imagine how mad the new york city lawyer would be if he had to answer those questions.

And that’s the face of Andrew Cuomo’s integrity agency.

Barry you need to resign if this commission has any hope of a rebirth.
Posted by David Grandeau at 8:56 PM