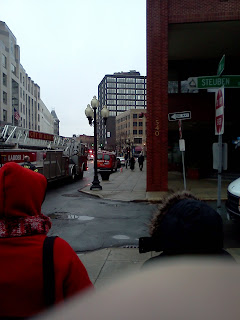 Herb and Terri strolling down Broadway. Even Nero stayed while Rome burned


Inquiring minds want to know why Herb Teitelbaum was at JCOPE today?
Was he interviewing for the executive director’s job?
Was he interviewing for a temporary counsels job?
Was he practicing before his old agency, that is, representing a client?
Was he developing a new niche practice of leaking information to the targets of an investigation?
Or was he offering advice to JCOPE and, specifically, the acting executive director Terri Shilacci, on how to thoroughly embarrass the agency and undermine ethics enforcement in New York?
In case anyone has forgotten: See the following, which made New York a national laughing stock:
http://www.ig.state.ny.us/pdfs/Report%20of%20an%20Investigation%20Concerning%20the%20Commission%20on%20Public%20Integrity.pdf
On the subject of the acting executive director Terri Shilacci why did she abandon her post during an emergency to go for a stroll with Herb?
Or maybe Herb needed to use the state car to go deer hunting again.
So many questions so few answers.
Posted by David Grandeau at 2:56 PM