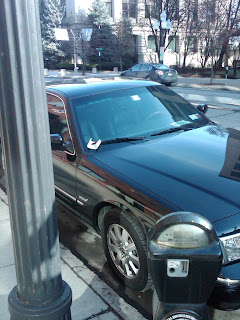 JCOPE’s chairwomen Janet Difiore continuing to park at an expired parking meter and thinking her POLICE card on the dashboard will prevent Albany’s meter maids from giving her a ticket.
This behavior is also a glimpse into the mind of an arrogant public official that is comfortable using her official position to obtain a benefit the rest of us common folks don’t get.
This is the third JCOPE meeting in a row with her royal highness parking her official Westchester county vehicle outside the JCOPE office at an expired meter. She knows it’s wrong because as soon as the car was ticketed her bodyguard (I’m sorry security detail) went into the meeting room to whisper in her ear that it happened again and then went and moved the car.
I hate to say it but Ms. Difiore needs an intervention or a resignation. YOU ARE EMBARRASING THE GOVERNOR. If you can’t regulate your own ethical behavior how can you sit in judgment of others? Caesar’s wife shouldn’t get parking tickets.
Is it too late to bring Mitra Hormozi back as chair? I didn’t always agree with her (there is a lifetime ban opinion that needs revisiting) but she never embarrassed herself or the governor and she did get rid of most of the gang that couldn’t shoot straight.
Posted by David Grandeau at 4:45 PM