AWESOME
That’s the only word that truly describes the three ring circus that passes for J-JOKE nowadays.
They had a meeting today, I attended and for a guy like me it was in a word awesome.
Camera crews crawling all over the sidewalk outside the JOKE’s Albany office.
Ravi Batra rolls up in a chauffeur driven Mercedes-Benz – Awesome
John Milgram tells me he won’t provide the FDS forms unless I provide him individual names.  OK John then provide me a list of employees.  Milgram says I have to make a document request.  I tell Milgram he is a JOKE. - Awesome
The new chief economist can’t decide to turn left or right to enter the conference room, I guess she was calculating the economic effect of her decision. – Awesome
Biben enters the room followed by her minions including the commissioners, a new counsel that looks young enough to need Difiore’s nanny and at least 8 J-JOKE staffers.  (Here’s a J-JOKE How many NYC staffers earning over $100k does it take for Biben to hold a meeting in Albany?).  After everyone is in the room Milgram throws the camera people out. – Awesome
I now can use the new tips and complaint section of the website to make a complaint that Milgram violated section 74 of the Public Officers Law by using his official position to benefit another.  In this case Difiore who clearly did not want cameras in the room (I don’t blame her have you seen some of the pictures the media is using – see below). – Awesome
Biben goes on the record to state that the New York City office is now open.  This establishes that during February, March and April it wasn’t which begs the question if there was no New York City office and Biben et al were not in Albany where were they working or were they working? – Awesome
Biben then states that the source of funding rules go into effect tomorrow but no forms or instructions have been prepared.  They won’t be prepared until the rules and regulations mandated by the statute are formulated. (should have been done by June 1).  But everyone should be prepared to file the source of funding information for some unspecified time frame in the future.  Are you serious?  Forget everything else that statement alone is grounds for Biben’s resignation or termination.  That’s no J-JOKE that’s a travesty. – Awesome 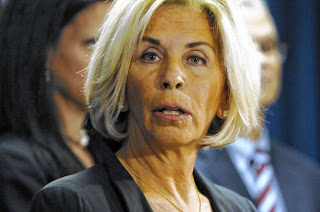 Posted by David Grandeau at 3:53 PM