Tips Complaints and a Chief Economist

J-JOKE has a new section on their website for tips and complaints.
No kidding. Check it out at the increasingly dubiously named website: www.nysintregrity.org
That should solve the lack of investigators willing to work for the JOKE (rumor has it a top FBI staffer turned Ellen down flat – that’s one smart FBI staffer).
Well, the apocalypse has some tips and complaints of their own.
Why does New York’s integrity agency need a chief economist?  And yes they have one, just look at the business card below.  Why have former IG personnel been hired at six-figure salaries in New York City, while line personnel who do the real work in Albany have been let go? This is sound management? This is the way to address the growing backlog?
And by the way if Miss Kitty is the chief economist where are the rest of the economists?  Reminds me of that old 60’s sitcom F Troop, lots of Chiefs and no Indians, does anyone remember the Fahkowees (oops Hakowees)?
To the extent the chief economist is in charge of the lobby department, here’s a tip - there is a difference between registrations and bimonthly reports.  It’s not guns and butter.
Why won’t John Milgram provide the financial disclosure reports I requested?  Maybe I should file a complaint on the commission’s web site.
Here’s a tip John, I’m going to get them eventually and you have no idea what I am looking for so you can’t prepare for the real complaint I’m going to make if I find it.
Some of you may have noticed the Biben alert at the top of the page.  As a public service I will try to find out the location of Ellen Biben every work day and report it to my readers.  But you can help, if you know where Ellen is drop me a line and I’ll pass it along.   Why am I doing this?  I noticed a huge uptick in employee travel expenses once Ms. Biben was hired, it’s tough to live in New York and work in Albany, something has to give.
And in case the readers haven’t figured it out yet I think I gave J-JOKE and its leadership enough time to prove themselves . . .  your trial period is over.
How many times can I say it it’s not the law that needs tweaking, it’s not the JCOPE  structure that needs tweaking it’s the leadership and all of Ellen’s NYC IG friends now making six figure salaries at the JOKE that need tweaking.
It started with secret meetings, it moved on to commissioners making donations at meetings and the chairwomen refusing to pay the parking meter and now we have chief economists,  the source of funding law going into effect without rules or regulations, an executive director with a political tin ear and questionable management skills, a chairwomen under investigation for a nanny problem, leaks from the commission and Senator Libous still swinging from John Milgram’s non confirmation confirmation tree.

That’s a lot of tweaking for 5 months. 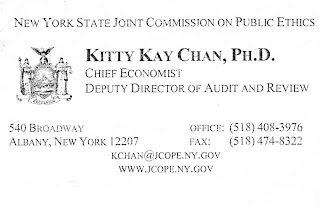 Posted by David Grandeau at 9:21 AM